What to do in Santes Creus? 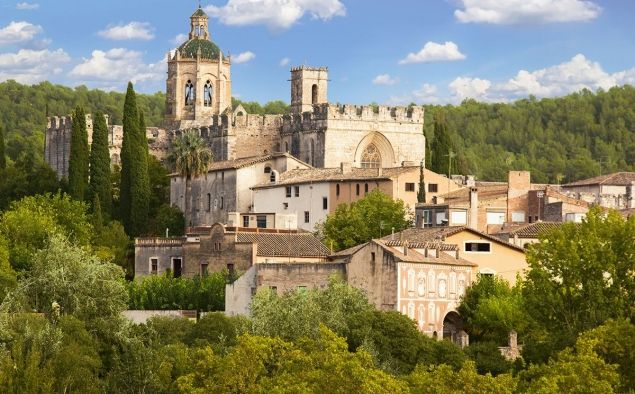 Located in the Alt Camp and just 1 hour from Barcelona and 35 minutes from Tarragona, Santes Creus is the capital of the municipality of Aiguamúrcia. This small town of about 200 inhabitants is located on the left bank of the Gaià river and near the Monastery of Santa Maria de Santes Creus, a jewel of 12th century Cistercian art in Catalonia.

Do you want to discover what this small town hides and what to do in Santes Creus and its surroundings? You cannot miss this blog!

To know the origins of the monastery we have to go back to the 12th century. Exactly in the year 1160 when it was decided to start the construction of the monastery by the Count of Barcelona, ​​Ramon Berenguer IV. By building the Monastery of Santes Creus, the monks fulfilled one of the norms of the Rule of Saint Benedict for the construction of monasteries, and this was that the monasteries had to be away from the large and full population centers to facilitate gathering.

Apart from this rule, the monastery also follows others, such as that the church has to have an austere decoration and only with geometric elements or that the monastery has to be oriented to the north and the cloister to the south.

Santes Creus stands out for its history and all the unique decorative elements that make it an unbeatable monastery, with every corner of it having a special detail to observe.

The main nucleus of the monastery is made up of three basic pieces: the church, the cloister attached to it and the chapter house. The enclosure is completed with the refectory, parlor, the monks’ room and, on the second floor, the common bedroom. Inside the church, on both sides of the main altar we find the two tombs of Pedro lo Grande and Jaime II.

When to visit the monastery?

According to the Catalan heritage website, the monastery is open from Tuesday to Sunday, including holidays. And the schedules are as follows:

The general price of the ticket is € 6 and the reduced ticket is € 4, those who appear on this list will have the right to reduced or free admission.

Even so, if you have any questions, we recommend visiting this website, calling 977 63 83 29 or sending an email to [email protected]

What to see in the town of Aiguamúrcia?

Besides from the Sanctuary, if you visit the town of Aiguamúrcia, you cannot go without walking through its charming streets and visiting the squares that make it up, such as “Plaça de Jaume el Just” or “Plaça de San Bernat”, where on the side you will find a charming fountain with the same name.

In addition to the charm of the streets, in them you will also find different stops where you can buy different details to take the most loved ones or accessories and clothing accessories made by hand.

If you like wine and visiting wineries, we recommend the “Bodegas Visendra”, which stand out for their wine. In addition to these wineries, you can also see the “Sindicato Agrícola de Aiguamúrcia”, a modernist building from 1914 that currently operates as a cooperative winery.

Where to stay in Santes Creus?

Just 20 minutes from Santes Creus we find Félix Hotel, our Hotel in Tarragona, located in Valls. A perfect family hotel to stay.

At Félix Hotel you cannot miss our Chardonnay Jacuzzi suites or the superior rooms with a bathtub like the one in the photograph, since after a tiring day, what better way to relax?

If you visit Aiguamúrcia and its monastery, don’t hesitate to tag us on our Instagram @felixhotelvalls. We will share your photos!